When the long nights and short days of winter start wearing you down, when you look for a little more sunshine in your upcoming weekend, what do you do? Have a party! A Frolic, in fact. A fun and frivolous frolic, a Fermentation Frolic.

Fermented foods are getting a lot of attention lately. The science behind their benefits seems sound, and humankind has a long history of using them. The beneficial bacteria and microbes partially digest elements of the food, making them easier for us to digest, they add nutrients, they crowd out other, harmful microbes, they can make the food taste better and keep longer. My friend decided to host a party devoted to the pleasures of fermentation, both making and consuming. The invitations went out, the day arrived!

Our attention to fermentation began with considering alcohol. Yeast eat the sugars from grains, fruits, and other vegetation, creating alcohol as a byproduct. Alcohol is a handy thing to have in your drinking liquid if you don't want germs to grow in it. Eventually, the alcohol content can become high enough to even put the yeast to sleep. Distilling it concentrates and refines it. That was the sort of alcohol we were experimenting with tonight.

The first order of business was seeing to the liquor cabinet. It wasn't all about volume, it was about variety. So many cocktail choices! We started off with Bloody Marys using a homemade recipe for the mix while we prepared for the official cocktail sampling. I was in charge of that part. 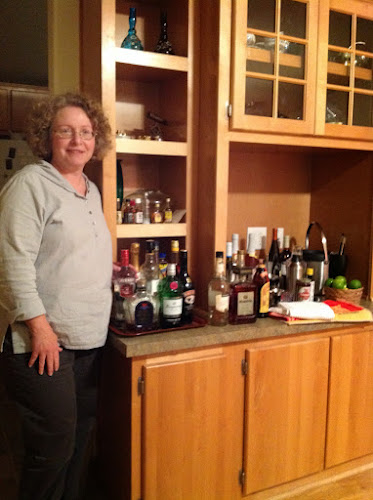 I was well-prepared, with a half-dozen promising recipes, the required ingredients, and a sack of cocktail glasses picked up from Goodwill. I had recently finished reading The Drunken Botanist, by Amy Stewart, and had a good idea of what a classic cocktail should be all about. It is not an alcoholic slushy in a vase, it is not an iced pitcher of goods poured into tumblers. A cocktail should be a small, intense, quality treat in a a proper cocktail glass, prime of which is the martini glass. It took some looking to find some of those which held the requisite 6 ounces. 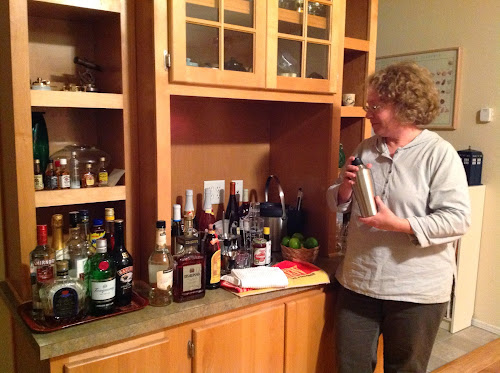 Next, begin mixing cocktails. I decided to go from sour to sweet, starting with a White Lady.

1 part orange liqueur (should have contreau, but I used triple sec)

The fun part was using the cocktail shaker. I made one drink and divided it up between the four of us who were there that night. I figured that over the course of all the drinks, we would each have about one good stiff one. This drink was brisk and refreshing. It did need to be very cold to taste good, and a little dilution didn't hurt. I tried to garnish the drinks with a bit of lemon curl, but the one in charge of making those hadn't figured out the lemon curler by the time I needed to hand out the drinks.

The next gin drink was the Gin Sling. Apparently there is a Singapore Sling that is famous, but it called for cherry brandy. I wasn't willing to pay for the good stuff, and I couldn't bear to buy the cheap stuff. So I made a gin sling. Most of those recipes called for sweet vermouth, which I also didn't have, so I found a recipe that did without. I can't quite remember the proportions I used, but it went something like this.

Shake with ice, pour into cocktail glass, add a bit of soda water, some crushed ice, then a dash of Angostura Bitters.

This one was one of the favorites. It just all came together in a tasty, balanced icy little treat.

The last gin drink was to be the Jasmine. Supposedly, this drink would taste like grapefruit juice. I discovered Campari's lovely complex bitterness some time before, and was looking forward to a new way of using it.

Shake with ice in cocktail shaker and strain. Indeed, it tasted remarkably like grapefruit juice! With a significant kick. This was another one that benefitted from long shaking with the ice. The color was a lovely pinkish hue, a bitter enough to please those us with that taste preference.

Now it was time to start in on the creamy drinks. I had one in the cards called an Orange Chocolate. I don't remember now exactly how it went because it was sort of ho hum. But it went something like this:

Shake with ice, strain. As I recall, the taste was improved a bit by adding a squirt of Nestles Quik syrup. But not really worth it. Some time, I'll try it again using some different orange tastes.

Pink Squirrel. Ok, I'll say it. The name. It's the name. The first time I heard of it was when I was barely old enough to drink and an elderly family friend ordered it at a casino in Reno. I was impressed with the whole package, the name, the color (pink) and that she knew about it. So I hunted up a recipe. It actually calls for Creme de Noyaux, which is supposed to be nougat or something, and it is red. But I also read that it is virtually identical in flavor to Amaretto, which I already wanted for my liquor cabinet. Not seeing any reason to duplicate, I substituted. The Pink Squirrel is almond-flavored and is garnished with a maraschino cherry. So to make the necessary pink color, I tipped in a little of the cherry syrup.

Shake up with ice in a cocktail shaker, strain into cocktail glasses. Garnish with a cherry.

We all just thought this one was pretty fine. It was rich and tasty, but not overpowering. What was in the little glass was enough. Almond is such a delicious flavor!

No one living through the 90's could have escaped the popularity of the Mudslide. You can buy big jugs of the mix which you pour in a blender, adding equal parts ice, and whir until you have a big chocolatey alcoholic slushy. And I think they are fine. But I wanted to see what a REAL mudslide cocktail tasted like.

Shake with ice in a cocktail shaker and strain into a cocktail glass. Really really good! It gave the Pink Squirrel a run for the money. I think both of those drinks are worth keeping the stuff around for.

One thing that is a necessity about making cocktails for yourself is toying with ingredients and proportions to get the results that please you the best.

We had a lot of fun trying these out, and everyone was encouraged to only drink what was liked, feel free to pour out what doesn't please you. I feel as if I could make an order at a bar now, if I needed to, knowing that I would get something I liked.

Posted with Blogsy
Posted by Carolyn at 6:17 PM