Clothing, ahh, clothing. The pieces of fabric or other materials we drape ourselves with to protect us, to provide pockets for our little necessary items, to make a statement, to adorn ourselves --what a relationship we have with something that could have just been a necessary part of life, like a piece of white bread that is there only to hold the sandwich filling in!

New mothers dress up their babies in tiny little adorable items they got for gifts, maybe not very comfy for baby, but it all makes for a charming picture. And of course color and style-coded, so people don't have to risk offending by asking if it's a girl or a boy.

Adolescents have a mixed relationship with their clothes, sometimes loving but often hating what they wear. Pants that make them feel fat, shirts that make them feel like they look fat, underwear that is uncomfortable, nothing that matches right, socks that your friends make fun of, being sent home for wearing something inappropriate...

I am going to start this post with something I owned and loved for years, but never wore. How can that be, you ask? Well, this is how it went.

There were four of us kids in the family, and three were girls. We didn't have a lot to spare for new clothes. Our new clothes came, most reliably, twice a year. We always did "back to school" shopping and got a pair of shoes, a few outfits, some underwear, and maybe a new coat. For Easter, we all got new Easter dresses and some pretty accessories. But we had one other back-up, the Grow-into box.

Most of the clothes in the Grow-into box were hardly worn, fashionable and well-made, and all of them were for girls. That's because they came from our cousin Faye, who had one well-dressed daughter, Stephanie,  just a year older than my older sister. Stephanie's clothes came in a steady little stream, so there were always exciting forays into the box about twice a year to see what now fit whom. And there was one dress in the box I had my heart set on, the Pink Dress.

The pink dress was, well, pink, one of my favorite dress colors. A pretty cotton-candy pink and overlaid by white lace. It was very cute, but not so dressy that one couldn't wear it to school. This was in the days of little girls in dresses at school. I was young for my grade and small for my age. Maybe not skinny, but smallish. The dress was too big; each season I hopefully tried it on, and each time it was too big.

And then you can guess what happened. In between one trying-on and the next, it became too small. Just like that. And my younger sister got it instead. I hope she enjoyed it like I would have. But now, instead of wearing it out and forgetting about it, (unless maybe someone would have taken a picture of me in it), I remember it in a different part of my brain, as the One That Got Away, the missed opportunity. And with that,  the realization that time and the growing-up of kids never waits. It never ever waits.

I can't remember if it was a gift, a hand-me-down, or part of back-to-school shopping, but we all fell in love with my younger sister's robe. It was made from bath towels, in a sort of yellowish and avacado earth-toned pattern that was so popular in the late sixties and early seventies. The edges were fringed, and it came down to about the knees. It had a metal zipper pull with a big brass ring that pulled down to about the navel. It was great! Especially for getting out of the bath. Most fabrics were synthetic back then, so a fluffy cotton towel would feel especially nice to wear next to your damp skin.

My mother had an old black iron Bruce Rotary sewing machine that she would pull out every now and then and sew madly on, either mending a pile or whipping out something for us to wear, without a pattern. I remember one summer when she made my younger sister and me a couple of summer shifts. We each got to pick some pretty calico (mine was pink, of course; my sister's was blue). She laid out our full slips with the fabric on the dining room table and cut around them. After she sewed the dresses, she put inset lace a few inches from the bottom and ran matching ribbons through it. I loved it and thoroughly wore it out.

My mother took a look at my sister's robe and pronounced, "I can make this!" I got to pick a couple of towels I liked, white background with a floral earth-toned pattern, and she went to work with the scissors and the sewing machine. And it worked! In short order I had a robe just like my sister's, except for one thing. And that always did bother me a little bit. Well, more than a little. My zipper did not have a cool brass ring on it.

I don't quite know where it came from or who first owned it, but we all ended up owning it, my mother, my sisters and me, and all at the same time. The white skirt was a heavy knit cotton blend with a wide, sewn elastic waistband, and its gored panels made it lie smoothly across the hips and flare gracefully over the thighs to just above the knee, a little higher or a little lower, depending on whether my mother or my younger sister was wearing it. This was during the early 70's, the era of the micro mini skirt, so as long as it was above the knees and was decent above that direction, it was both fashionable and modest to wear on its weekly outing, to church.

The whole household getting ready for church was quite the process. My older sister's hot rollers, which quickly became common property, were plugged in by the first female who claimed them, Mom would turn on the AM radio to the Sunday morning gospel show hosted by the Gospelaires ("Give the World a Smile each Day...!" we would all scurry around getting dressed and gathering up bibles and stocking purses with chapstick and quarters for the offering, and someone would think to holler out, "I've got the White Skirt!" 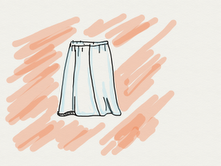 We were not very well-stocked with a big array of church clothes that not only felt comfortable, but looked nice too. The beauty of the white skirt is that not only that it was comfy, but it went with everything. And I mean every type of blouse or shirt that any of us had. And it was thick enough that you didn't really have to wear a slip, either. If you especially wanted it, you had to think fast and get it before someone else did. Because someone would. I am sure that it was worn by someone every Sunday during its entire life.

Looking back on it, I find myself thinking about community-owned items. We all shared an interest, we all took care with it, and we didn't fight over it, as I recall. I know that doesn't always happen with these kinds of things. People might be more careless because "it's not really mine." Or they want to be sure to "get my share" out of it. But the white skirt worked for us.

And when it was finally too stained and worn out to work anymore, we tried to replace it. But all we could find was a thin polyester double-knit with a skinny elastic waistband that was gathered a little fuller at the hips. And you had to wear a slip with it.

Not navy, as in navy blue, but navy as in US Navy. My new boyfriend was in the navy and for the first 6 months of our relationship was gone often. I don't know if it was because I admired it, wore it once and he liked how it looked on me, or if it was a whim, but he gave me one of his navy chambray work shirts. It was an older one, and it had been mended and darned. But that worn-in look made it more special to me. I liked wearing it when he was gone--it made him still feel close by to me.

One fun thing my best friend and I did for Halloween was to dress up like our husbands, who were both out of town, to come to the family Halloween party. I wore denim jeans and the chambray navy shirt. We both painted heavy eyebrows on and I painted a mustache.

Clothes can be ornamental, like the suit you put on for nice and then strip off as soon as you get back. They can be functional; a bathing suit, a warm parka, a uniform.
They can be easy come; easy go.
And they can also be very personal and mean more that just the fabric they are made out of.

I am not sure if I can wear a denim skirt again. Just last week I saw a woman in a denim skirt, its soft faded folds draping attractively and comfy-looking on her. I thought about it, that maybe Iwanted to get one, perhaps at the thrift store, to see if it would be something I'd wear. But then I knew it would not make me feel good to have it, and I'd probably never wear it.

Denim skirts were a stand-in for pants.

When I was younger, I was a member of a church that did not believe that women should wear pants. There were other dress rules and grooming standards, but it was the pants thing that was the hardest on me. Wearing a skirt instantly reduced your options for activities you might want to do, like tumble around on the grass, sit cross legged in the dirt, ride a horse, ride inner tubes down a snow bank. You could look sloppy chic in jeans; you looked sloppy unkempt and dowdy in a skirt. When it was cold, your legs got cold, and your feet too, since sandals looked best with a skirt rather than shoes. When it was hot, you sweated and your thighs rubbed together, since there was no airflow beneath the thick fabric.

Why, out of all the possibilities, did someone choose to call pants "men's wear only" and ban them for Christian ladies? It felt like a burden imposed just to make life a little harder for women.

It would have been ok if I'd chosen to wear a denim skirt occasionally for the fun and fashion, but of necessity, it was the daily go-to garment for a busy young woman with only a casual bent for dressing up.

But eventually I made my choice. I chose pants. Loose-fitting jeans with a stretch in the fabric, cotton knit leggings, big blousy linen pants for summer, sleek black polyester pants for dressing up.