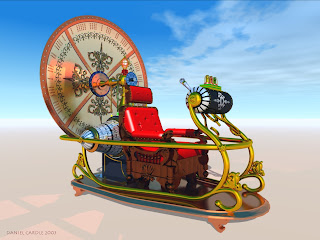 Travelling backward through time; what’s not to like? We could be our former selves, more energetic, younger, and beautiful, with years and years left to sort out all the things we didn’t do quite right in real life. Of course, we’d have our mature, current brains to help us with that! Lovers of history could go back to witness first-hand the dramatic events that molded the world we live in today. Edge forward in the crowd to watch give his Gettysburg Address, buy a ticket to watch Mozart perform his pieces in person.

HG Wells put his Time Traveler into the future. That’s fine with us, since his present is our past. His future was a little uncomfortable, with the Morlocks and Eloi, but it was terribly exciting, and scary. Modern movie-makers have done a lot with the subject too. In The Butterfly Effect, the main character keeps going back in time to “fix” the things that went wrong that kept his beloved from being his girlfriend. But then when he went back to the present, those little events he changed had unseen, unfortunate consequences. He was never able to make it work for him. I just finished listening to an audio book called Blackout/All Clear. Set in the near future, the scenario has “historians,” traveling back in time to observe but not alter events. In their understanding, events CANNOT be altered because of the fixed “space time continuum.” Things begin to breakdown when the historians during the London Blitz get stranded and they fear they have indeed altered events, perhaps enough to change the outcome of the War, and their present world.

When I was a kid in high school English class, we had to write some science fiction stories dealing with time travel. I remember one of them had an outcome that only a kid would come up with. The guy does some bad things, stealing some money and basically burning his bridges. But that’s ok because he is going back to the past with it and will be rich. Only when he gets there does he realize, as his purple bills blow away in the breeze, that his money’s no good here. My other story dealt with the paradox of changing the past to affect the future. The protagonist does not believe that changing the past will make any difference to what has already happened. But he must prove it to the others. So he goes back in time and shoots his father, only to feel his atoms disintegrate and dissolve.

But it can. Most of us have a Time Machine of sorts. The other day I was transferring hours of old family VHS video tape to av files on my computer so I could organize it and make dvd copies for my kids. It was very affecting to go back in time 20 years and watch our little family. The kiddies’ cute little voices saying, “Mama! Mama?” My young handsome husband tossing the baby up in the air and making baby talk. Myself, unwrinkled and thin, wearing my contact lenses. My dad, still alive, sitting on the back of the tailgate, talking with my grandma, also still alive. Truthfully, I couldn’t watch a lot of it all at once.

My Time Machine made me laugh, it made me exclaim, it made me a little melancholy. While it made me think of former good times and reminded me of how adorable my kids were, it was also a fraud. What I was seeing wasn’t real; it was at one particular moment in the past, but now it was just a very vivid memory in flickering lights. I could long for that memory, feel sad about how things have changed, wish I could reach out to that image and set that baby on my lap. But no one can do that because the only thing that is real is right now.

My Pop introduced me to a fascinating (ok, lowbrow fascination) show called “Hoarders.” The woman on one episode had hoarded so badly, her house ended up being ruined and unsalvageable. She collected and hoarded Victorian memorabilia. You could see that she was drawn to that era and used the items to mentally put herself there. They were her Time Machine. But while clinging to this idealized past time, she was destroying her “now,” her house, her relationships with friends and family, and her sanity.

Do you have any Time Travelling devices or knick knacks? I like all my little Time Machines, but my goal is to let them take a back seat to my appreciation of the present, and my living of the NOW!