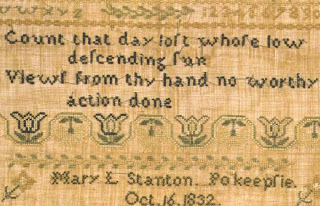 It seems to be the nature of humans to take ideas, core beliefs, and basic philosophies and condense their essence down to mottos and sayings, abbreviations and acronyms. The athlete says, “No pain without gain,” and the die-hard Bluegrass traditionalists say, “If it ain’t got a banjo, it ain’t !” A family returning home from a long trip may look around at the shabby surroundings and say sincerely, “Be it ever so humble, there’s no place like home.” I’m not terribly fond of apples, but I believe there is truth in the saying, “An apple a day keeps the doctor away,” and so I find ways to crunch down on a Honeycrisp or Pink Lady every day or so.

Some time back I learned the difference between an abbreviation and an acronym. An abbreviation can be the initials of the main subject, such as I.R.S., the government organization we love to hate. Yesterday I read a little story about a father who used an abbreviation of words as a saying for his young son. Whenever the son was in a situation where he might lose his composure, become upset, or use bad judgment due to peer pressure, he should say the secret code word to himself: “Essie.” Essie would help the growing boy to cope with difficult situations and difficult people. Years later the boy realized that Essie was the way his father packaged the advice of “SC,” or self-control.

Acronyms are fun. They are when you take the first letters of the main object or saying and put them together to make a pronounceable word. Some acronyms started out as abbreviations and have actually become real words. Think of snafu and radar. “Situation normal; all f*ouled* up,” and “Radio detecting and ranging.” Some years ago when I was dieting, I wanted a saying or acronym to put it all together and inspire me. With much tortuous wordsmithing I came up with S.E.P.T.I.C, “Special eating plan to improve cuteness.”

Our family has developed various sayings over the years. When we say them, we don’t have to try to come up with the words to convey just the right meaning of what we are thinking; the saying does that. We all know what you mean when you say “When you work, WORK. When you play, PLAY!” When you are fixing the fence or stacking the firewood then put all your attention there. Work hard and steady, and get it done! And then, when you kick back with your musical instrument or get your horse ready for a ride, don’t worry about whether your stack was straight or keep taking breaks to go back to tighten the fencing.

One set of sayings that is particularly important to me is “Could’a, would’a, should’a,” and “What’s done’s done.” I have a bad habit of second-guessing myself and regretting what I should or shouldn’t have done.” Saying these to myself helps to put a bookend on that row of worry and second thoughts falling off the shelf of my mind.

When different members of the family were moving around, going to school, still trying to get settled, my sister gave this saying, “Where family is, that’s where home is.” My mother used to say, “Every unpleasant experience you have, if it doesn’t kill you, helps you learn something.” I loved how the exception for death was inserted!

The most profound statement in our family is also the most enigmatic. I can’t remember whether I introduced it to my mom after I read it somewhere, or if she told it to me after hearing about it. It is short, only three words. I was moved enough by this saying to put it in counted cross-stitch and frame it, one of only two cross-stitch projects I ever made. My mom hung it by her front door. It said, “It Doesn’t Matter.” When someone worried excessively over an insignificant problem, you could say, “It doesn’t matter,” and you didn’t have to explain your advice further. The saying wasn’t just words; it was a philosophy. Don’t fret and worry over the things that aren’t important in the scope of life, because they just don’t matter that much. Eventually we quit saying it; we just pointed up to it and smiled.

Years ago, the framed saying would go crooked, probably when someone shut the front door too hard. Picture straighteners can’t stand that state, so someone would jump up to slide the string on the back of the frame along the nail to make it level again. But one time I stopped my mother who had stepped over to fix it. “Mom,” I said solemnly, “Really, It Doesn’t Matter.” She stopped, laughed, and stepped back.

It hangs crooked to this day.