The Mystery of the Lost Rider

This post is in honor of Shar, who compliments me by enjoying my blog, even though she finds food boring. 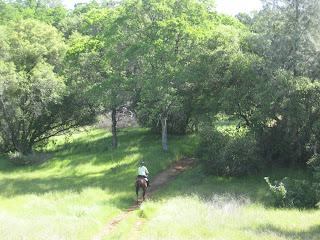 The Old-Timer patted the dusty, sweaty neck of Tucker and leaned forward, wearily, almost whispering into his horse’s ear, “There, Old Fella, that flat grassy space. Just a little further, and then we’ll rest awhile.”

Tucker’s ear swiveled back, and almost as if he understood what the man said, the little Arab quickened his pace as if to reach the small, verdant glen sooner than his previous plodding would have done. Old-Timer winced. Tucker wasn’t limping any more, but the man wanted his horse to take it as easy as possible, just in case the old stone bruise wasn’t completely healed up.

As they reached the small glade, Old-Timer slid off Tucker’s back. His legs held him up just long enough to check his horse’s feet, and then, satisfied, slumped down into the long, green grasses, just to set a spell. Tucker pulled up a mouthful of the green stems, and then, his nostrils flaring, found what else he was looking for beneath the trickle on a granite exposure of the hillside.

“So old Tuck’s found himself a water hole.” The man chuckled. He pondered on this latest good luck. “I guess we may as well stay here a day or two. Rest up, see if we can figure a way out of this God-forsaken country.” Old-Timer was used to conversing with Tucker. Sometimes using words, sometimes not. But they always understood each other. Tucker nickered, and then paid some more attention to the water hole.

With a groan, Old-Timer rose to his feet and reached out to his horse, loosening straps and buckles, pulling off the saddle and bridle. He laid them together on a flat, lichen-covered boulder near the water hole. After making sure there was enough water to spare, he pulled a tattered sponge loose from the saddle clip and dipped it into the little runoff culvert and stroked it over the sweaty, dusty shoulders, neck and legs. Only then did he dip his hands into the cool depths and splash his own hot, browned face. He sat down and leaned against the cool, shaded rock face, stretching his legs out in front of him. The man chuckled with real humor as he noticed the most recent rips and shredded areas in his faded black riding tights. He was almost ready to fashion a loincloth from a section of Tucker’s horse blanket. But the thought quickly made his expression serious again as he imagined how he might arrange his clothing and still be comfortable while riding.

The man pulled the small plastic bag from his pack and reverently opened it, unfolding a wrinkled and weather-stained sheet of paper. Forty-nine small tick marks decorated the edge of the crudely drawn map. With the stub of a pencil, Old-Timer put another mark. Now, that’s fifty, he thought. Fifty days, lost in this wilderness, this trail-crazed wilderness, a maze of trails that joined up with other trails, only to peter out, trails that had been made by off-road vehicles, only to dead end into rivers and creeks, game trails, cattle trails, and finally, his own trails, made when he was still frantically chasing his own tail up and down the canyons and hillsides. The only trail he never found was the one he was looking for, the one marked with the blue ribbons.

Now that Tucker had settled himself down to some serious eating, Old-Timer felt that he could finally satisfy his own stomach-growlings. The granola bars were long gone. The Slim Jims were just a greasy patch in the fabric of his pack. He had even licked up the crumbs from the pretzels he’d thrown in his shirt pocket that morning so long ago, back when he was innocent and believed in accurate maps and well-marked trails. He’d learned, after that, to make do for himself.

Pulling a few more threads from the hem of his shortening cotton shirt, he fluffed the material and arranged it carefully in a small, protected rock clef. He gathered small tinder and larger sticks and set them by to feed the fire that he was so adept at making by now. He pulled out a cloth-wrapped bundle from his pack and unfolded it, revealing a shaped chunk of rock and a horseshoe. Taking the flint in one hand and the horseshoe in the other, he struck at it with the rock, sending a shower of sparks onto the threads, starting them to glowing. He blew air on the precious coal, carefully, and set bits of dry, splintered wood on it to catch fire.

Once the crackling fire was stable enough to satisfy the man, he turned to the next task—making his dinner. Some time back, probably twenty tick marks ago, he had managed to break his aluminum water bottle in half. Since he already had a couple of plastic bottles for water, and his pressing need was for a soup pot, he’d decided to sacrifice this one. He now filled it up to its ragged edge with water from the little rivulet and set it on three stones within the fire to come to a boil.

When the man had lain down in the grass, he had thought that he’d smelled a familiar odor. Now he went looking for that and found it, a patch of wild onion stems. He smiled, feeling the saliva rise, just from thinking about the flavor of wild onion soup. The soil was moist and gave up its white pearls with just a bit of tugging. He washed and peeled them, and then set them into the simmering water. He rummaged around in his bag again. This time he pulled out a folded white card. The scores dutifully written by the ride vets were now not as important as the treasure folded up within. He opened it flat and tipped out the dried sage leaves he had come across a week or so ago. Old-Timer smiled.

“Ok, Tuck. I need you now for this part.” Old-Timer approached his little horse with a fresh bit of cloth. He dipped it into the stream, and then stroked it over the cleanest part of the brown hide he could find, and then rinsed it in his gray plastic water bottle. After letting the sediments settle, he poured the slightly bitter, salty liquid into the bubbling soup. “Never could stand a soup without salt,” he said. Just before the soup was done, he threw in a handful of nettles to thicken the broth and add some more nutrition.

Finally he settled down with his meal. This wouldn’t do for very long, he knew. Not nearly enough calories. But maybe tomorrow, he’d catch a fish, or maybe scare a buzzard off a kill that was fresh enough to do for a man. The onions were really a find; he’d pull a handful, lay them on a rock to dry out in the hot afternoon sun and pack them for next time.

Old-Timer hadn’t given up hope completely yet. If he did that, he may as well just lay down and die! No, for Tucker’s sake if not his own. He knew that he had lost any chance of winning a prize for finishing, and that disappointed him. But getting out of this labyrinth would at least meet one of his personal goals. He snickered to himself. If he ever got out, he was going to rip off his bumper-sticker that said “To finish is to win,” and replace it with one that said, “To get out alive is to win.”

The tired man tied Tucker’s lead rope to a nearby tree branch and then wrapped himself up in the hairy horse blanket, glad for the warmth, not minding its rank odor. As he drifted off to sleep, he prayed for release from his recurring nightmare, but relief did not come. All night long, in his sleep, callous mountain bike riders were pulling yards of blue trail marker ribbons off and letting them blow away in the breeze.
Posted by Carolyn at 12:12 AM