Wine and Chocolate in Lodi 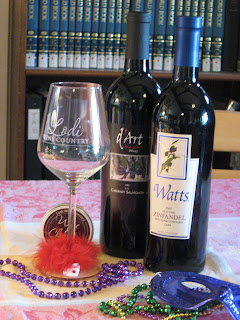 This weekend, Feb 13 and 14 the Lodi Wineries are holding their annual “Wine and Chocolate” tour. My daughter, Melinda and I, having absolutely nothing better to do than go wine and chocolate tasting, ordered our tickets. Can you really think of very much nicer a way to spend a beautiful sunny Saturday than tooling around the rural vineyards and orchards, stopping at posh little wineries nibbling brownies and sipping good Zinfandel?

The first stop was the Lodi Wine Center. Kathleen, my gps, was not behaving well and tried to send us on a wild goose chase, but we wrestled her down and found the place in good time. We collected our wristbands, wine tasting glasses and tin of chocolates. Our designated driver collected his wristband so that he could have cookies and stuff, no wine, but lots of compliments from the servers during the day for his sacrifice. We had an event map that we had highlighted the wineries we didn’t want to miss. This was important, as there were about 40 wineries involved, and none of us really thought we could manage the whole gang in only 5 hours. Since we weren’t local, it was a one day shot for us.

I didn’t know much about Lodi wines, but now I know how important Zinfandel grapes are to the region. Zinfandel seemed to be the predominant wine, followed by Cabernet, Chardonnay, a little Merlot, and some other Spanish grapes that I can’t remember the names of right now. I think I like Zinfandel second only to Cabernet Sauvignon, at least from my limited experiences. We tasted a LOT of Zinfandel, and I was looking for a bottle to buy.

One place we went to, Michael David, was festive; they had souvenirs of Mardi Gras beads and shiny masks. There, I had what was probably the nicest wine up to that point. It was a Zinfandel named “Gluttony,” part of a line-up of their “Seven Deadly Zins.” I would have paid about $25 for it, but unfortunately, it was $60. So I took another taste of it and moved on.

(At this point you might want to read my post about cheap wines, if you haven’t already!)

Sometime during the first few stops on our route, we had the nagging feeling that we had gotten in with the wolf pack and might have to break loose. The limousines were showing up just ahead of us. You know that sinking feeling when you are on a trip, and you need a restroom, burger and drink in that order, but you see that 3 school buses and a tour bus have pulled in the McDonalds just ahead of you? Thankfully, our next stop was a near miss as we had to make an awkward turnaround to go down the poorly marked road. No limo could have made that maneuver, so we were able to drop out of that pack. After that, we had more breathing space.

We really enjoyed seeing how the different winery owners were able to express their other passions within the winery setting. D’art is owned by Dave and Helen Dart. Because he wanted to showcase his beautiful artistic talents as well, he arranged his framed paintings, decorated the facility, and named it D’art, “of the Art.” Harmony Vineyards featured a magnificent built in pipe organ, played live during the day.

Our last stop of the day was a vineyard plaza. About a half dozen wineries had located at a central area in the Lodi area to make a sort of outdoor wine mall. It was there at the Watts winery where I bought my 2cnd bottle of wine. The server was a knowledgeable, very personable young man who was very good at what he did. It made me really understand how important it is for a winery to not just have a warm body to stand there and tip the sip into your glass, but to interact, to tell you with his words and body language, “Isn’t this a great wine?”

We had a great time. A person could probably better do serious wine tasting by limiting the number of wineries and tastes during one day, but for fun, this couldn’t be beat. And I did get 2 bottles of great wine to set aside for the next special occasion!
Posted by Carolyn at 12:02 PM